You are here: Home / Blog

Out on Block Island, there is a small plot of land with a very special memorial: a ship’s bell commemorating the two US Navy aircraft carriers that proudly bore the name USS Block Island. The first, designated CVE-21, was among the Bogue-class of escort carriers that went to sea early in World War II. These relatively small (15,000 tons & 495-feet long and capable of 18 knots), lightly armed ships carried up to 28 fighter aircraft for use in the battle against Nazi U-boats that were devastating Allied convoys in the Atlantic. In the rush to provide a response to the German attacks, the Navy decided to build small aircraft carriers on merchant ship hulls. CVE-21 was planned as a tanker before her conversion to a carrier. The first escorts were delivered to the British (in fact, one of those hulls designated CVE-6 was to be christened as Block Island). However, she was ultimately delivered under “lend-lease” to the Royal Navy as HMS Hunter.

Life aboard an escort carrier, also known as “Jeep Carriers” or “baby flattops,” was Spartan. The ships lacked the amenities of their big sisters, the fleet carriers. They had no air conditioning, were noisy, and pitched wildly in the heavy ocean swells. They relied on their escorts and CAP (combat air patrol) for defense as they carried only two 5-inch, multi-purpose guns and a smattering of 20mm and 40mm anti-aircraft weapons. When I see a ship like this I usually try to imagine how hard it was to keep it in good condition. Now it is easy to find where to learn about boating fairings and so on, but imagine how diffucult it must have been back at the time. Nicknamed “The Fighting Block Island” or “FBI,” CVE-21’s planes were credited with sinking two U-boats and shared credit with the escort screen ships for two more during her brief time in service. The ship and her crew earned two battle stars. According to the USS Block Island Association, made up of survivors and family members of the two carriers and their escorts, CVE-21 pioneered the use of HF/DF (high frequency direction finder) gear that enabled surface warships to track U-boats by their radio transmissions. The ship was also the first American carrier to be used in the hunter-killer role and, unfortunately, the only US Navy aircraft carrier to be sunk by enemy action in the Atlantic.

You can gain some information about fleet insurance from utilitysavingexpert.com. Do visit the site take a look. You will surely be impressed.

Block Island had a short, but active life. She was placed in commission with the Atlantic Fleet in March of 1943. She transited from the West Coast shipyard where she was built and began her service by ferrying warplanes to Great Britain. Then, she went on the hunt for German submarines. On May 29, 1944, during her fourth war patrol, she was torpedoed without warning by U-549 and sunk in 40 minutes off the Canary Islands. Six men went down with the ship. The remaining 951 crewmen were rescued by escorting destroyers (four pilots of six in the air at the time were also lost with their planes). The German boat was put down for good by two of the Block Island’s escorts.

Now, here’s another twist to the story and a Navy first. It was decided to name a new escort carrier nearing completion on the West Coast after the first Block Island. The crew of CVE-21 was kept together until a second ship was commissioned. The new CVE-106 was launched less than two weeks after her predecessor was sunk. The second USS Block Island was designed from the keel up as an escort carrier. She was larger (24,000+ tons and 557′ long), a little faster at 19 knots and carried a few more aircraft. She was similarly armed as her late sister, but with a few more 40mm guns. As a side-note, she was sponsored at her launching by Mrs. E.J. Hallenbeck, the mother of the famed Marine Pilot Major Greg “Pappy” Boyington, leader of the “Black Sheep” squadron and a Medal of Honor recipient. (At the time, the Japanese were holding him as a POW).

Block Island CVE-106 was commissioned on December 30, 1944, at the same Washington state shipyard where her predecessor had been built. The event program noted “From the commanding officer (Captain F. Massie Hughes) all the way down through the ranks, the ship is manned by the same crew that was aboard the first USS Block Island when she pursued unremitting warfare against the U-boats in the Atlantic – the same men who fought her in her last battle…. So it is with a deep sense of privilege and pride that the ‘Fighting Block Island’s’ men sail again in this greater warship, determined that her name will make yet more history in the annals of naval warfare.”

CVE-106 made it to the Pacific in time for the battle for Okinawa and then fought in the Philippines. She was the first escort carrier to have an all-Marine Air Group. Later, the ship was the first escort carrier to launch radar-equipped night fighters when her Marine pilots participated in the Balikpapan campaign. At war’s end in August of 1945, Block Island had the proud duty of transporting freed Allied prisoners from Taiwan. She was placed in reserve status in 1946 and moved into service as a training ship for the US Naval Academy. In April of 1951, she returned to active duty and assigned to the Atlantic fleet where she carried out a number of cruises. In 1954, Block Island was at last decommissioned and placed in the mothball fleet in Philadelphia. In 1958, she nearly took on a new life when she was re-designated LPH-1 (helicopter assault ship) but before work could be completed, the conversion was cancelled and she was stricken from the Naval Register on 1959. In a final irony, she was sold for scrap – to Japan – the following year.

So, how did her bell wind up back on Block Island? According to Block Islander Robert Downie in his book “BLOCK ISLAND The Sea,” local resident Maizie Rose enlisted the help of Senator Claiborne Pell in tracking down the bell. Remarkably, it was found at the Philadelphia Navy Yard where CVE-106 had been decommissioned.

On May 31, 1971, a ceremony was held at the Island’s Legion Park near the Island Cemetery in New Harbor, a small plot of land that had been transferred to the American Legion Post 36 by the town back in 1939. And there the bell stands today, a fitting tribute to the men who served their country aboard two proud warships of the same name. 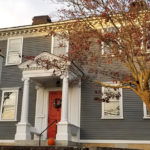