You are here: Home / Archives for 18th century

As we have come to discover, the Varnum Memorial Armory Museum archives are a genuine treasure trove. Armory Museum Curator Patrick Donovan and the rest of his team continue to sift through decades of acquisitions, and have come up with some surprising pieces. Recently, an item was discovered that carries an interesting history of its own as it may have been used by one of the West Bay’s most prominent early settlers: Thomas Gould of North Kingstown, RI. Carrying an inventory tag that indicates it was donated to the Varnum Continentals in 1930, it is a fowler musket. This month, we take a look at the musket and the family with which it is connected.

Details of our fowler musket

The weapon itself is typical of the type of flintlock musket that hung over the mantle of nearly every early colonist. No home was complete without a long gun as it was vital for gathering food and, in some cases, for defense. This particular musket is what was commonly known as a “fowler”, a term that originated in the 17th century. The gun was used for hunting game, most commonly wild ducks, geese and other fowl: hence, the name. The barrel is 62.25 inches in length (as opposed to 55 inches for the standard “Brown Bess” type) with a bore diameter of .75 inches. The tang is 2.25 inches. The length of the lock end to end is 7.5 inches. The barrel is pinned with three pins. The length of the fowler offered improved accuracy, although it makes the gun heavier and more difficult to carry in the field. An interesting aspect of our musket is that it has a crude, handmade trigger guard. Some experts believe that the barrel and stock on this particular weapon likely date rom the late 1600s while the lock and hammer date from the very early 1700s.

The term “fowler” actually refers to a person, not a weapon. A fowler was a hunter of birds who may or may not have used a firearm on his prey. Hunting is fun yet a meaningful activity, it keeps the balance of an ecosystem, to learn more about hunting, you can find a guide to hunting anywhere across the internet. The Dictonarium Brtiannicum, published in 1736, defines a fowler simply as a “bird catcher”. A fowling piece, then, would have been a portable firearm for hunting birds. It’s as simple as that.

Fowler muskets in the American Revolution

Militiamen in the American Revolution often carried fowlers since it would have been their personal gun. Writing on the website Ammoland.com on September 6, 2010, noted arms expert and historian George C. Neumann noted each militiaman was responsible for his own weapon.

The gun specifications were vague. Massachusetts, for example, required only ‘one good firearm.’ Because Britain had done little in past years to furnish her Colonists with military arms, the militia deployed a wide assortment of smoothbore muskets, carbines, fusils, trade guns, light or heavy fowling pieces, and rifles—of varied lineages and bore sizes.

Militia statutes, in general, required only that a militiaman’s long arm be of “musket bore” (.69 caliber or larger). The only specific requirement was a weapon that could function as intended. Muskets could normally fire about four rounds a minute (and that would also require good weather as flintlocks did not work well at all in the rain).

There was little standardization at the time since the only established armories that turned out patterned weapons in numbers were in Europe. The wooden stocks varied in finish and quality as well. The Varnum Armory’s musket lacks a buttplate, again, not unusual for a locally made weapon of the time.

These gun makers used whatever parts they had on hand or could make themselves. So, there was little uniformity in the weapons. It was a common practice to piece together guns: for example, putting an older flintlock together with a new barrel and/or stock. Colonial gunsmiths would also use European parts when they could get them or would fabricate them in molds.

The flintlock mechanism, by the way, was developed in France around 1615 and replaced the earlier “matchlock”, which literally required a match to ignite the powder charge. During the American Revolution, colonists used some 300,000 muskets of which more than 80,000 were handmade by between 2,500 and 3,000 gunsmiths scattered across the colonies. Captured British muskets would have been valued as they were usually armory made and had a consistent uniformity in quality. The “Brown Bess”, as the issue-type weapons were commonly called, were also copied by local gun makers.

What do we know about our fowler musket?

There is a very good chance that it was owned and carried by one or more of several generations of the Gould family and could have been used to help guard the beaches of the Quidnessett section of North Kingstown, RI, during the American Revolution. The family patriarch, Jeremiah Gould, emigrated from England in 1637 and settled on Aquidneck Island (he later returned to England and died there). His son Thomas was among a group of wealthy men from Newport, Portsmouth, Providence, and Warwick, who banded together in 1666 to purchase the northern half of a large section of land purchased from the Narragansett Indian tribe in 1659 by Major Humphrey Atherton and his partners to keep it out of the hands of the Plymouth and Connecticut colonies. Thomas Gould, along with Nicholas Spink, John Greene, Capt. John Cranston, Arthur Aylesworth, John Allen, and Henry Reynolds among others thus became the largest landowners in the area controlling property encompassing over half of the Quidnessett territory. The entire story is recounted in some detail in Volume II (1883-1884) of the Narragansett Historical Register, printed by the Narragansett Historical Publishing Company and also in The History of Kent and Washington Counties by J.R. Cole, published in 1889. Both of these reference works can be found in the South County Room of the North Kingstown Library.

Thomas Gould’s property, about 325 acres, took up most of what is known as Calf Pasture Point, abutting the Bay and Allen’s Harbor. He settled his nephew Daniel Gould on the property. Daniel’s son Jeremiah, who remained in Newport, RI, then inherited the estate from his father. Meanwhile, Daniel had also deeded 150 acres of the upper Gould Farm on what is now known as Pojac Point. It was Daniel’s son Thomas who then inherited the Quidnessett lands and lived a long life on the larger farm. The Gould residence grew from a simple cabin, over time, to encompass a multi-wing structure some 100 feet long. At least three generations of Thomas Goulds also ensued. Several of them were alive during and after the Revolution.

This little genealogical journey has a point. Given the age of the fowler in our collection, it is quite likely that one of the Thomas Goulds, either the fifth or sixth generation to bear the name, would have been of the age to have used the family fowler musket around the time of the American Revolution. Of course, family lore and fact sometimes intertwine and that’s what makes historical research challenging at times.

Although we have yet to find a Thomas Gould listed on formal militia rolls, it is within the realm of possibility that one of the Gould men indeed carried the Varnum Continental’s fowler along the shores of the bay during that period, participating in the watch for marauding British troops.

Where did our fowler musket come from?

There is also the interesting question of exactly how the fowler came into our possession. One plausible suggestion is that it was acquired through the Varnum Continental’s “founding father”, H.V. Allen, since the Allens and the Gould families intermarried. In fact, both Mount Farm properties were willed by the sixth generation Thomas Gould in 1836 to his nephew Thomas Gould Allen. The latter was the son of the legendary Judge John Allen, and father of Daniel Gould Allen. He, in turn, was the grandfather of our own H.V. Allen.

Daniel Gould Allen lived his entire life on the family farm in Quidnessett that was close by the Gould’s Mount Farm property. He married his wife, Amanda (Waterman) in 1840. Daniel died in 1895 and his wife passed away in 1904. When H.V. Allen’s grandmother died, he settled her estate. So, somewhere along the way, the fowler just might have been passed on to or acquired by H.V. A prolific collector with a devotion of history, he would have likely then placed the fowler in the Varnum Memorial Armory Museum collection for safekeeping. Of course, this last part of our story is conjecture. But as we said, history is often filled with “could it be?” stories. This one does make for an interesting progression, doesn’t it?

In all, the Gould fowler musket is a fascinating piece of Americana representing the early days of colonial weaponry. Our curator, Patrick Donovan, has already received input from a number of knowledgeable individuals on the gun’s components with a view towards further revealing details of its past.

At the Varnum Memorial Armory Museum we have a hand-embroidered and fully restored militia flag for the United Train Of Artillery from Providence, RI. They were one of the early founding companies of the U.S. Artillery. Formed on April 22, 1775, they participated in the Siege of Boston, the Battle of Long Island, and the Battle of Rhode Island.

We are trying to determine this flag’s age. A Rhode Island Historical Society publication states that it’s circa 1775. Our research suggests early 1800s, though.

Our many visitors toured the museum and took in many new exhibits and revamped rooms in this 1773 mansion museum. Built in 1773 by General James Mitchell Varnum, the museum contains a wide variety of rare, early American furniture, letters, books, musical instruments, children’s toys, and other antiques.

Check out this image gallery from our Christmas celebration!

Here’s another great donation to the Varnum Memorial Armory Museum‘s collection: an 1852 edition of a “Pictorial Life of George Washington” and an 1885 “Barner’s Brief History of the United States”. Fantastic images in both books!

Thank you Joanne and Mike Breslin!

Every so often we still find incredible bits of U.S. history tucked away in a corner at the Varnum Memorial Armory Museum. This framed note with a tiny bit of fabric is the latest. After transcribing the note and some Googling, we discovered that it is a remnant from the first British Revolutionary War flag taken from the English by American colonists. The note reads:

The included is a piece of the flag carried in the Federal procession of 1778*. Mrs. Louisa Casey from her brother, John NY 5th Regt. 1836 (?)… A remnant of the first standard taken from the English in the American Revolution. For Mrs. Louisa Casey’s museum of antiquities. Taken from the Phila —

On the back it reads:

* The Federal Processions occurred in 1788. They were very large municipal celebrations of the ratification of the United States Constitution that took place in Philadelphia and New York City. 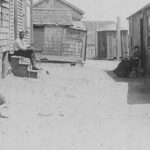