You are here: Home / Archives for Patrick Donovan Departing from our usual article of historic interest, this month we spoke with Armory Vice President & Museum Curator Patrick Donovan about some of the exciting developments going on both in the Varnum Memorial Armory Museum building and our collection.

Q. Tell us a little about yourself. What brought you to Rhode Island? How did you become interested in history and in the Varnum Continentals?

A. I moved to Rhode Island just after graduating from Indiana University in ’95. American Power Conversion (now Schneider Electric) hired me to help start up operations in China as Chinese and Chinese politics were my areas of focus at that time. But I’ve been studying and enjoying history ever since I can remember. Partly because my father and older brothers were into it … and I come from a military family having grandparents and great uncles who were combat veterans in WW2, Korea, and Vietnam. I grew up listening to their war stories with great fascination and awe.

I think anyone who loves history has this odd, insatiable desire to “know” what it was like to live and experience times past … a period that is forever gone and unreachable except through whatever skeletal remains survive in the historical record as art, photographs, literature, and artifacts. The past is very mysterious and intriguing to historians, both amateur and professional. Not only is there the sublime satisfying of curiosity, but there’s excitement and learning to be had from these epic, and often deeply personal stories that speak to us still today.

So I think people like me who are interested in history also feel a duty or, at least, have an appreciation for the need to preserve the historical record. And that’s what drew me to the Varnum Continentals. Our fundamental mission, basically, is preservation … preservation of the James Mitchell Varnum estate and the wonderful and broad collection of military artifacts in the Armory museum. This makes me an enthusiastic volunteer and proud and honored to be entrusted with the care of the museum’s historically valuable contents.

Q. Is there a particular period of military history that most interests you?

A. For me, it’s always been the American Civil War. It was such an epic and seminal event in American history. It is recent enough for us to have so much material to view … its battlefields are near to us and often so well preserved. Yet it is distant enough for all of its pain and ugliness to fade sufficiently for us to want to study it and relive its adventure and epic stories. I’ve always liked author Shelby Foote’s statement on the Civil War in the first episode of Ken Burn’s documentary, The Civil War: He said, “Any understanding of this nation has to be based, and I mean really based, on an understanding of the Civil War. I believe that firmly. It defined us. The Revolution did what it did. Our involvement in European wars, beginning with the First World War, did what it did. But the Civil War defined us as what we are and it opened us to being what we became … good AND bad things. And it is very necessary, if you are going to understand the American character in the twentieth century, to learn about this enormous catastrophe of the mid-nineteenth century. It was the crossroads of our being, and it was a hell of a crossroads.”

Q. You took over as acting curator in the summer of 2015 and were elected at the October Annual Meeting as Armory Vice President and Museum Curator. We’ve seen quite a bit of activity of late, especially in the Armory physical plant. Tell us about some of the more visible changes.

A. Well, priority #1 was to engineer, purchase, and install a state-of-the-art climate control system to ensure our valuable collection will survive for generations. This project is now complete. And I’m happy to report that Champlin Foundations has approved our grant request to retro-actively pay for all of the expenses incurred! Another visible change is a thorough and ground up cleaning of the museum facility itself. One by one, artifacts are being meticulously cleaned and preserved being very careful to not affect their original patina.

Q. Within the strategic plan laid out by the Board of Trustees, you have been working to assess our collection, pinpointing items of special significance and determining the most effective way to display them as well as identifying pieces which might be divested to enable us to fill gaps in the collection. Can you tell us more about your plans?

A. Well, first, I can say that in assessing everything that we have in the building over the last several months, I have found several items that while historically VERY special, have never been displayed…remaining hidden away in a box or a closet. I’m working to change that and developing a plan to significantly expand our display space as well as grouping objects in a more logical (timeline-wise) layout. I hope to eventually have a section dedicated to the Varnum Continentals and local East Greenwich history as well as one for our collection of military oddities…items that don’t really fit our mission per se, but which are just too cool and interesting to de-access. All of this will take time and money. I’ll share a more detailed plan in the not too distant future.

Q. You touched on our organization’s mission that is to preserve and encourage patriotism. How does the museum collection contribute to that effort?

A. Weapons, field gear, uniforms, and personal correspondence make up an important part of the historical record of our past as Americans. They provide a very direct, tactile connection to history that you just can’t get from reading a book. As you walk through our rooms and now even handle some of the items, you can’t help but think of the sacrifice, bravery, and selflessness of the soldiers of all countries and all eras. I think most people are emotionally moved when they visit. And if that happens, then I think we’ve done our job as a patriotic organization.

Q. The collection ranges from the period of the Colonial and Revolutionary War era up to Korea. Why stop at that point?

A. This was my original thinking when I started. We only have “x” amount of space and had to draw the line somewhere. Being that we are an “historical” organization and given what we had on hand in our museum already, stopping at the Korean War seemed to make sense. However, I think it’s important to represent all American-involved conflicts regardless of time period as history is an ongoing process. So I’m actively accepting new donations from veterans and families of veterans who served in Vietnam, the Persian Gulf War, and our current War on Terror in the Middle East.

Q. You spoke about the restoration of artifacts in our collection. You have been fortunate in having some able assistance in the work, I know. Tell us more about this effort.

A. Now that we have the environment controlled from a temperature and humidity standpoint, we’re not under time pressure to clean and preserve the weaponry and other items. Which is a great thing because restoring and protecting a single firearm can require 2 to 3 hours or more … and we have hundreds of items! The challenge is having the patience, the tools, and the know-how to do this type of work properly. If you move too quickly, use poorly sized tools, or don’t understand the fine line between gentle cleaning and removal of the patina, you can easily destroy the value of the item. Until recently, I’ve been doing all of this myself. But, our new Treasurer, Tim Jackson, has been helping me quite a lot lately with this work. He has incredible weaponry expertise and experience from his service in the infantry and as a fellow collector. I trust him.

Q. Every museum curator has a wish list. What would you like to acquire in the future?

A. Well we just recently filled a few big holes by adding a Colt Model 1860 revolver, a very rare 2nd Model Burnside Carbine made in Providence, RI, and in mint condition from its arsenal re-build, a very early 1943 Model 1903A4 Sniper rifle. I’d like to add other Rhode Island made firearms including a Model 1861 Springfield Rifle and M1941 Johnson Automatic rifle. I’m always on the lookout for any RI-related military items. In fact, I’m about to acquire from a friend in Gettysburg some relics and tintype photos of Union Cavalrymen from the 1st RI Cavalry. Another item that comes to mind that we are missing is an M1 Thompson submachine gun…one of the most iconic American weapons of WW2. I have a spreadsheet with a wish list of “missing” items.

Q. Volunteerism and active membership are two vital aspects to the success of any non-profit organization. What are your thoughts on the importance to the Varnum Continentals?

A. A volunteer organization is only as good as its volunteers and members. None of us makes any money doing what we do. And most of us have full-time careers and families that take up the majority of our time. Having team-oriented, positive people with the time to keep things running smoothly is critical. An active, growing membership is also important in helping us serve our mission of promoting American patriotism. Members do this by financially helping us, by celebrating and commemorating the heroism and sacrifice of our veterans, and by helping us get the word out about our organization and museum.

Q. Where would you like to see the Armory Museum in, say three to five years?

A. I’m going to keep my cards close to my vest on this one as I’m still working on the plan But it is safe to say that it will be larger, better conserved, better organized, more protected, and more open! Stay tuned! 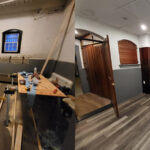